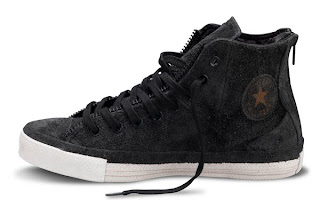 With deep roots in American style and culture, the Schott NYC jacket and the Chuck Taylor All Star shoe have led somewhat parallel lives. Converse began in 1908 and Schott in 1913 and as the part of the 20th Century unfolded, Chuck Taylor All Star shoes were unveiled and quickly became nearly ubiquitous in American life. Not long before Chuck Taylor added his name to the already then famous All Star shoe, in 1928, Schott unveiled the first motorcycle jacket ever. Named the "Perfecto", by the 1950s, the jacket had become a symbol of the new rebellion that was taking hold with the burgeoning teen culture that arose after the War.

A perfect collaboration and combination, Converse takes the original motorcycle jacket and fuses its design with the original Chuck Taylor All Star shoe. The result is a playful yet masculine shoe, with a rugged look that showcases the best of both including heavy-duty rear zip entry, zips under the laces and a patchwork of motorcycle jacket in suede. The shoe comes complete with a quilted lining; snaps on the tongue and a suede rand with a clean and sharp emboss detail. The Schott label is sewn discreetly inside the shoe and the classic. Chuck Taylor All Star patch is elegantly embossed in the suede and rests in its familiar inside ankle position. 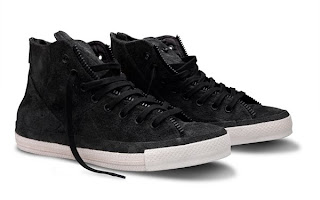 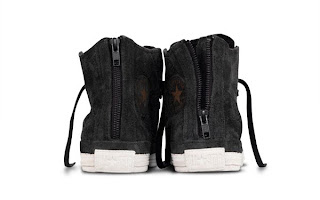 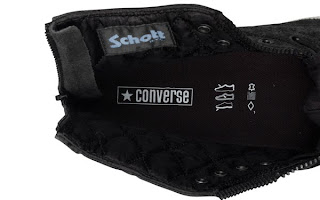