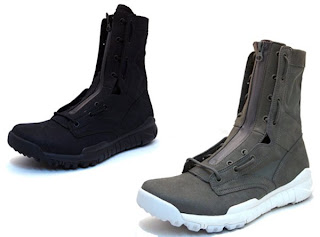 Four years ago, Nike’s Innovation Kitchen was given a new mission: Develop a 21st century boot to meet the needs of this century’s first-response teams and high-speed operators – aka elite level athletes in need of elite level performance innovation.

The SFB represents Nike’s continued pursuit of delivering the most technically innovative and lightweight product to meet the needs of athletes the world over.

The SFB, perfect for warm weather conditions, is the lightest, fastest drying, natural motion boot on the planet. It features a Natural Motion Cushioning unit that helps allows for optimal support and speed during heel to toe transfer, translated the boot is made to move and form with the foot’s natural motion allowing for quick flexible movement in any direction while drastically reducing the weight of conventional boots.

Offering unparalleled traction, the SFB’s outsole is fitted with a directional traction heel sole that utilizes reverse tread bars and a slightly raised heel for better traction going downhill, while the Sticky Rubber forefoot lugs were strategically placed to allow exceptional agility and traction in any terrain. Upping the ante on protection, the SFB’s mid-sole comes equipped with puncture and laceration resistant thermoplastic forefoot shield and genuine leather with Kevlar sheath, both placed in the sole of the SFB allowing the boot to form to the foot of its wearer while offering protection from jagged rocky terrain.

Highly protective while light and flexible, the SFB’s upper is comprised of a polyester woven shell wrapped in synthetic leather overlays which offers no “break-in” time associated with most other boots and drastically increased the quick drying properties via the polyester/synthetic leather blend. The no “break-in” properties alone make the SFB a natural choice for serious outdoors athletes and weekend warriors alike. Tying it all together, a Speed Lacing System made of 550 cord run through metal speed-lacing eyelets keep the foot securely locked down to the Natural Motion Cushioning unit while also making the SFB easy to get in or out of. The zipping element comes as an extra and can be added and removed from the boot when needed.

Simply put, this boot was built for comfort, speed, agility, and it was built to last.